Have you ever heard of ISS Group? Probably not. You probably only know the LOGO. But even there it is only placed somewhere inconspicuously in the background. It is a dark blue circle and in it, with lower case letters, simply "iss". Hardly anyone knows what this is all about. And that is intentional. Because the advertising is only aimed at the experts anyway. But what if we told you that the ISS Group is a Danish company that has quietly risen to become one of the largest employers in the world? We show the background.

The ISS Group - a brief profile

As we said, hardly anyone knows the ISS Group. It is a cleaning company from Denmark. The company is considered to be an extremely renowned company that is one of the most popular and highly respected providers in its segment. It was founded in Copenhagen in 1901. It has branches in over 50 countries. They employ over 525,000 people. An incredible number. With this dimension, the ISS Group is one of the largest employers in the world.

The Market for Facility Management & The Secret of Success

What distinguishes a global player like ISS from any other company, such as the cleaning company Zurich? Well, here's the thing. If you founded a company more than 120 years ago, you simply have more time to build up such a corporation.

In addition, enough investors may have put in their money to drive the business forward through acquisitions or organic expansion.

Another point is that facility management is one of the classic activities that international corporations like to outsource to a reliable provider. And to make sure that this also works in the context of globalisation, they take their partners abroad. When the many companies from the West started investing in China and Asia, they encouraged their suppliers to come along. That means the big ones became even bigger. Therefore, the market is splitting up. There are the giant suppliers, who usually live in close symbiosis with other large corporations. And there are the smaller chains that are mainly active in local markets.

Here is an overview of the most important key figures over the last few years:

Everything went well until 2019. But in 2020, business suddenly collapsed. This development can be traced back to Corona. In the period from 2014, the number of employees was reduced by over 130,000. Otherwise, the company would be much further up the list of the world's largest employers today. And here is the view as a graphic: 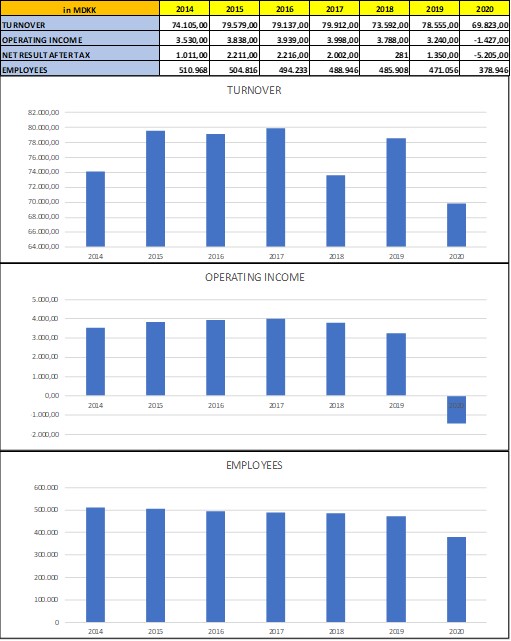 The huge loss from 2020 has almost completely eaten up the profits of the last few years. Let's hope that the company can recover.